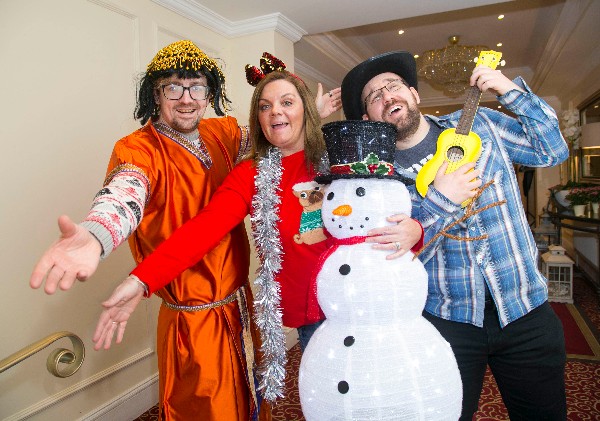 One of the most important events in the Nua calendar - The Service User Christmas Show - took place on December 18th at the Keadeen Hotel in Newbridge, Co. Kildare.

Numerous Service Users from across Nua’s services performed their favourite song / act / drama piece of choice. The work began in September with rehearsals taking place weekly in Kildare Farm Foods, who have been tremendously good to Nua, allowing us to use their facilities each year. We can’t thank them enough! Service Users performed to an audience of over 350 people which included their family, friends and Nua colleagues. Santa also made an appearance with Mrs. Claus and their elves!!

As early as September, the first set of rehearsals took place, where the choosing of performance pieces were selected. Once the acts were decided, the team from Nua's Outreach and Day Services co-ordinated the whole production of the show from start to finish. This year, there were many treats in store from our Service Users. Hits including "Walking in the Air", "Feed the World" and "Mistletoe and Wine" were performed on stage, all performances included choreography, which the Service Users had been busily rehearsing since September.

The production will be edited and turned into a finalised cut. At some point early in the new year a very special event will take place for Service Users. In conjunction with Odeon Cinemas, Nua will hold a red-carpet premiere screening of the Service User Christmas Show in Newbridge Odeon Cinema. Service Users will get to walk the red carpet, have their picture taken and watch their production of the 2019 Christmas Show in the comfort of the cinema.

The show has gone from strength to strength each year with everyone truly enjoying themselves. We are fortunate that our Board of Management recognise the positive impact of this event on Service Users, families and friends and provide the resources to carry out this event annually. To see the smiles and emotions on the faces of families and friends on the night, it stirs up emotions for all involved!

As for our Service Users, they are all so very talented and are all stars in our eyes!