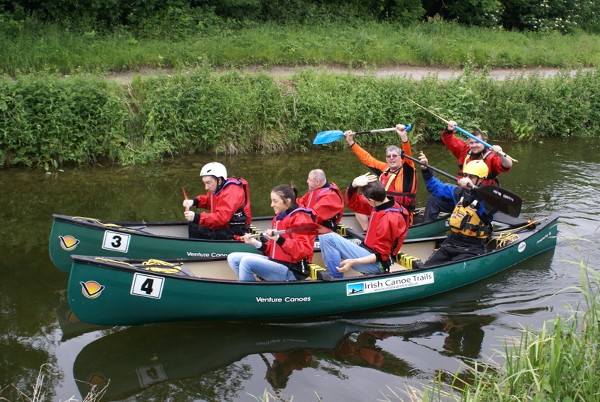 During the summer, Nua Healthcare’s residents and care staff took to the water in Monasterevin with qualified instructor, Karl Rafferty from Irish Canoe Trails. The weather was dry, excitement was in the air and the day was a fantastic success.

Chapel View residents took to the water first, rowing up the canal in braced canoes. one such resident demonstrated powerful rowing skills up front as staff member, Sarah Jane Ivers relaxed and enjoyed the experience, letting the men pick up the pace!Another resident Billy increased the speed even more as they progressed further up the canal as his co-navigator had a great time cheerfully splashing everyone. Staff member, Gerard Kelly, rowed vigorously as he got the hunger pangs half way up the canal, seeing the awaiting picnic at the finish line! The canoe supervisor and Chapel View resident John, kept everyone in toe and created an at-mosphere filled with fun and good spirit whilst ensuring everyone got across the finish line safely for the feast of tea, sandwiches and a few sneaky biscuits!

In the afternoon, a younger crew took to the canal from Tignish, Oaklodge and The Haven. This bunch along with staff, Niamh Davis, Geoff Elliot and Mary Mc Govern all pushed themselves and their canoes to the absolute limit. With record speeds, the team were on Scott O’ Reilly’s tail the whole way up the canal as they used all their strength to cross the finish line. Some participants were natural’s in the water, giving Ducks a good run for their money.

Whilst it was reported, (an anonymous staff member!) couldn't get to grips with rowing at all!!